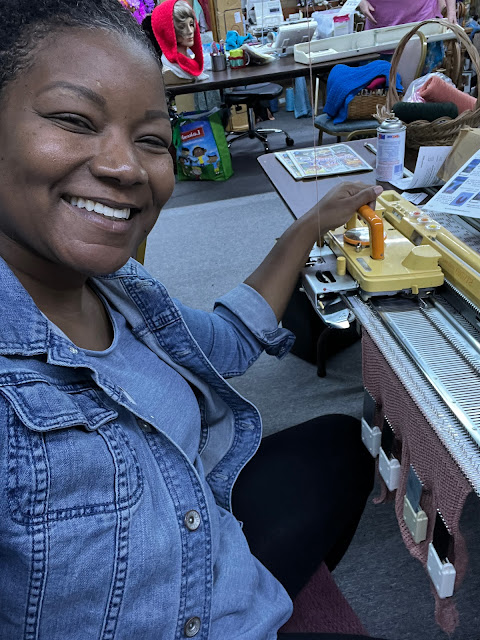 I bought my first knitting machine in February 2020. I had two lessons and just as we were scheduling the next one, the pandemic hit. I did take another virtual class at one point which helped me learn to use the color changer and understand the electronics of my machine a bit better. But I’ve largely been on my own, using You Tube, the MK Ravelry group, and an amazing FB group to get me through.

But unlike my usual eager self, I’ve been really timid about venturing deeper into machine knitting. Recently, I commented on a cute MK project on Rav and the maker emailed me to let me know that she was in Minneapolis and invited me to join the Midwest Machine Knitting Collaborative (MMKC). Woohoo!

I was already hooked up with a local mk salesperson and I’d seen frequent mentions to “Purls of Joy”. Honestly, I assumed it was something religion-based (like knitting for church charities or something) and didn’t think much else about it. Turns out, it was a machine knitting seminar and this year, 2022, was to be the final year! So I scrambled to attend the 2-day seminar. I learned a ton and was introduced to a bunch of  new knitters and resources throughout the state.

I learned about the 3-day class and when I got the email that 1) there was one spot left and 2) that it was very affordable, I jumped on it!

I drove up to St. Cloud on Thursday morning, ready for the 10 a.m. check in. There were lots of people already set up and knitting and I thought I was late! Turns out, a couple of women had come in from out of state and had taken in-person lessons the day or two before. Good to know!

Back in February (of this year), I hit the mother lode with my trip to WI and one of the machines is a standard gauge Silver Reed Sk360. I’ve been knitting on a Brother standard gauge and figured this would be a good time to learn the new-to-me machine and brand. The bulky I bought is by the Studio/Silver Reed/Singer brand as well.

But, I hadn’t taken this thing out since bringing it in the house in February! I knew that the woman I got it from hadn’t used it in many years. She was over 90 and said she’d long since stopped using the standard gauge because the stitches are too small to see. Not to mention this machine was manufactured some time in the early 80s, when I would have been a wee little one. I could use a little oil so figured the machine could too! 🙂

We started out talking about basic machine maintenance. I’d brought a new sponge bar with me because that’s a given – you should always replace the sponge bar in a used machine. We started cleaning it out and it just kept going and going! SO MUCH LINT! Oh my gosh! I swear I ended up with a pile of lint and dust that could fill an 8 oz cup. We oiled it up and I was off and knitting!

Much of the weekend was guided – we all knit: 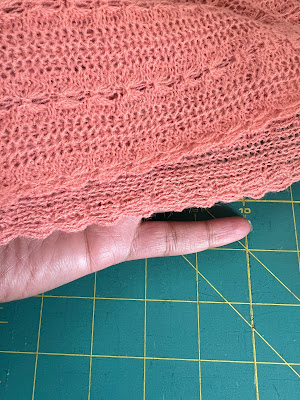 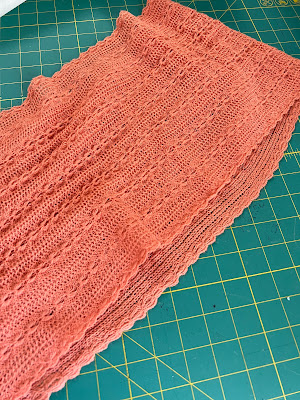 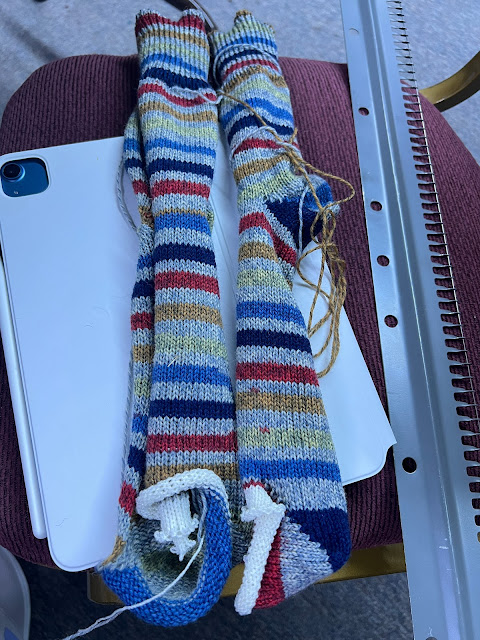 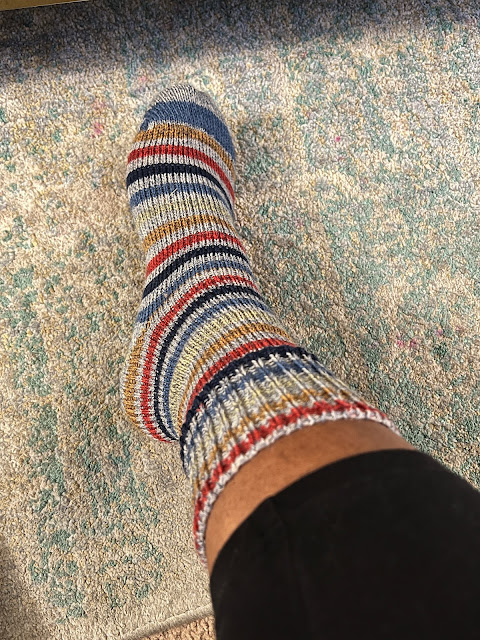 I seamed one of my toes wrong (the seam was on the outside).

So I undid it, but I couldn’t figure out how to redo it, so I’m just going to rehang the sock and undo the toe shaping, and re-knit.

Lots of skills! We also had “table talk” each day where we discussed different topics, which was super helpful. We learned how to fix things, we did a tour of the yarn shop, there was a bit of marketing too 🙂 Hey, they’ve got a business to run!

I also started a sideways sweater. I tried on a sample in size 44 and it was so cute! I knit the same size, and used the same yarn (different color), but mine is coming up smaller. Recently, there was a discussion about Silver Reed knitting up a little tighter than Brother at the same gauge. But, this is also why, you always make a swatch! I’m still going to finish it because it will *fit*, it just will be a fitted top vs. the intended style. 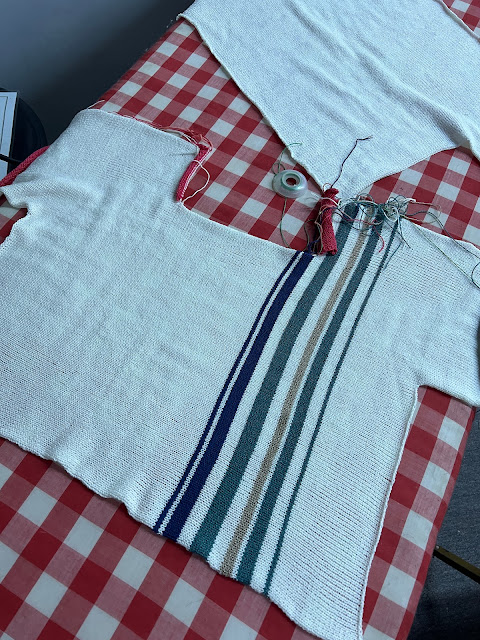 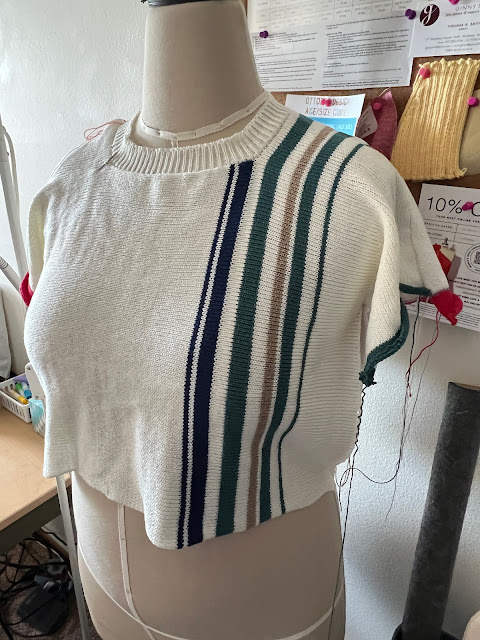 See? Lily can fit it!

I also shortened mine about an inch or so. I have a couple of dropped stitches that I need to pick up. Then, I’ll seam the other shoulder (I don’t like seaming on the machine and will do the rest with my linker), add the sleeve ribbing, and then the lower ribbing.

When I got home, I swatched (haha!) a cotton/cashmere (47%/53%) blend to make another version with some decorative eyelets, inspired by this: 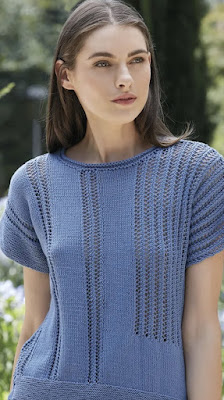 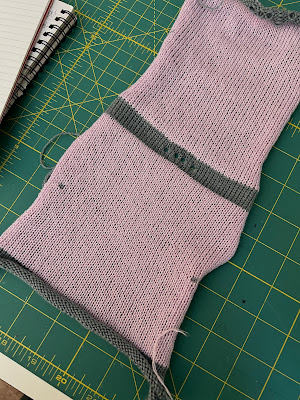 The fabric is so amazing!

The first two nights I ended up with a migraine. On day 2, I took my meds much sooner than I had on day 1. I ended up early in the morning, with my plastic mid gauge out and hooked up to the ironing board 🙂 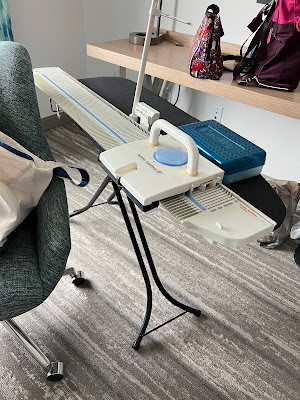 I knit the back and the head there, and knit the front when I got back home. I started seaming it together, but have a little ways to go 🙂 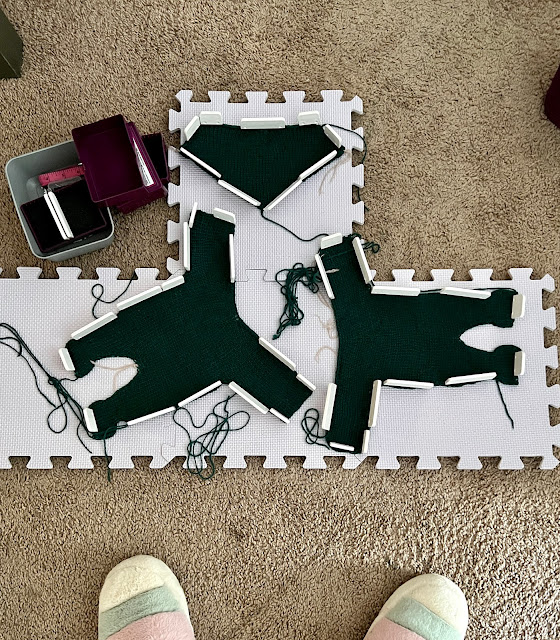 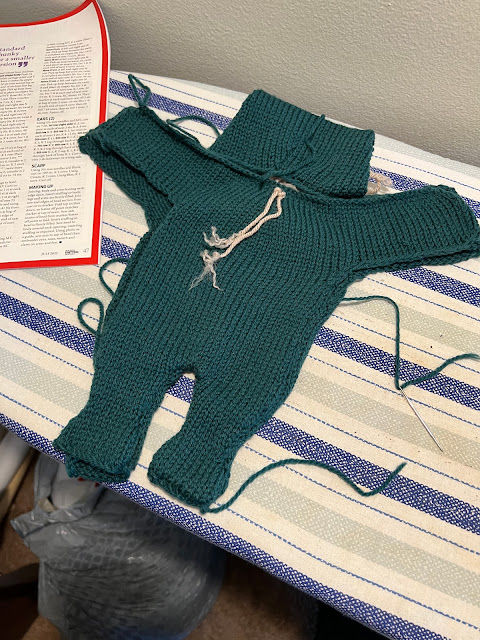 Hotels were SO expensive, especially for St. Cloud(!), but even with the hotel, food, and my shopping at the camp (I bought a couple of MK patterns, sock yarn, the next issue of Machine Knitting Monthly, and some items for my machine), it was well worth it!

I want to go to the next one, but there’s a high likelihood that a 70 mile drive in February or March may not be an option :-p

I rearranged my room a bit, bringing up the narrow table (18” wide x 60” long). It allows me to hook up a second machine when I want (yes, even with just 18” width!!). The folding table easily clears the space and I can get to the other long edge when needed. 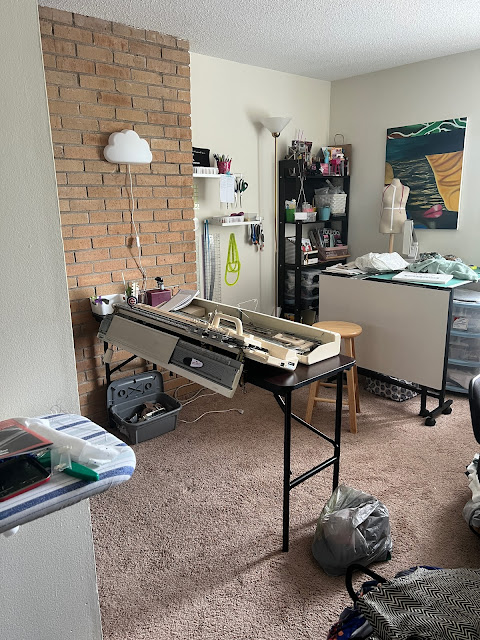 I definitely notice a difference between the two brands and am happy to be able to switch between the two standard gauge machines as needed. Now, I just need to get my bulky up, cleaned out, and running!