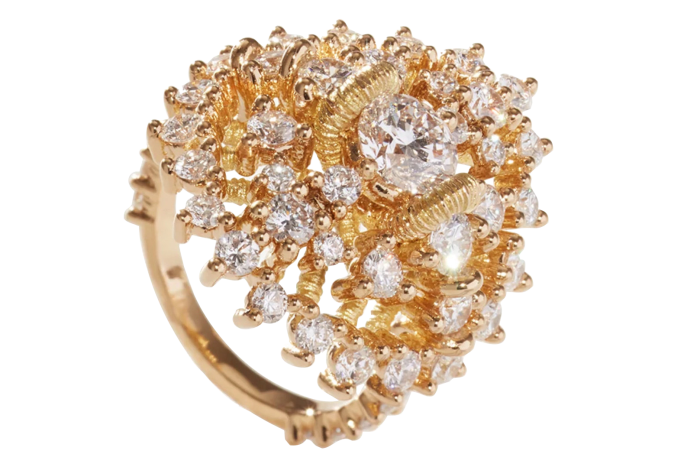 The future of jewellery’s luxury houses can usually be glimpsed by looking at their past. Drawings from the archives, artefacts, anecdotes and contact with historical events provide the stitches that can embroider enthralling tales for new products.

“Timelessness” and a “narrative that builds emotional connection” are fundamental to a brand’s desirability, says a 2019 study by fashion media and commerce platform Highsnobiety and the Boston Consulting Group.

No wonder, then, that the relaunch of names from the past is popular — think of French labels Patou or Schiaparelli, recently rebooted by LVMH and Tod’s, respectively, or the revival of Suzanne Belperron, one of the 20th century’s most influential jewellers, by Nico and Ward Landrigan.

The value of the luxury goods industry ballooned to €283bn in 2021, with the lion’s share taken by legacy brands including Dior and Louis Vuitton.

But, as turning cachet into cash proves to be such big business, the revival of old French jewellery houses has become a project for LuxImpact. This is a company founded by Coralie de Fontenay, a start-up investor and former executive at Cartier, together with Frédéric de Narp, previously at Harry Winston and Cartier.

Two years ago, LuxImpact began a joint venture with siblings Camille and Damien Vever, the seventh-generation heirs of Pierre-Paul Vever, to relaunch the famed Art Nouveau house that closed in 1982.

In March, it also reintroduced the name of Oscar Massin, who was renowned for setting the 140-carat Regent diamond in the crown of the French Empress Eugénie. The new collection is inspired by Massin’s signature lacelike diamond setting.

And, this month, it is the turn of Rouvenat, founded by Léon Rouvenat, who caused a sensation at the Great Exhibition in London in 1851 with his delicate designs enhanced by coloured gemstones.

However, LuxImpact does not simply wake up sleeping beauties, it aims to restyle them for the sensibilities of Generation Z. All the jewellery produced for the three revived brands uses recycled gold, and the Vever and Oscar Massin pieces feature lab-grown diamonds.

“These are the same as mined diamonds aesthetically, chemically and physically,” says de Narp. “They are the fruit of human genius and do not deteriorate the planet.”

Although the benefits of laboratory-grown diamonds have often been exaggerated, they strike a chord with environmentally concerned consumers. Paul Zimnisky, a diamond analyst, estimates that sales of lab-created diamond jewellery will grow by 20 per cent a year until at least 2027, when the gem-quality stones will have 10 per cent of the total diamond market.

Since Massin himself was highly innovative, and Vever mixed precious and semi-precious materials in keeping with Art Nouveau fashion, it seems apt that the new brands have turned to lab-grown gems.

But not so Rouvenat. “[This brand] is built on the principle of circularity,” says Marie Berthelon Gaviard, the company’s chief executive. “We seek vintage gemstones from vaults and safes worldwide and invite clients to bring their stones to be set in a new Rouvenat creation,” she explains.

All the materials used by Rouvenat are recycled and this includes the jewellery boxes that independent artists refashion from old packaging.

The serendipitous acquisition from a Parisian bookstore this year of 12 notebooks of gouaches and 3,000 drawings signed by Rouvenat has provided a wealth of inspiration for the brand’s debut collection, which will be unveiled this month.

Sandrine De Laage, a partner in LuxImpact who used to be a creative director at Harry Winston, has designed 50 earrings, rings and necklaces informed by Rouvenat’s four-pointed medallions from the time of Napoleon III.

Each piece is tailored at the last minute to use the gem chosen by the customer via the online store, or in the soon-to-open Paris showroom, and some of the pendants have shackles that allow charms to be added.

How do brands known only by jewellery historians and niche collectors find appeal with today’s consumers?

LuxImpact has turned to social media to spread the message (70 per cent of its communications budget) and it has devised bespoke strategies for each of the brands.

Vever focuses on the French market, where there is a longstanding appreciation of enamel craftsmanship. After it sold most of its high jewellery collection (including a €350,000 necklace), the brand opened its first concession at Printemps, the Paris department store.

LuxImpact launched Oscar Massin in the US — the biggest market for diamond jewellery, and widely accepting of lab-grown stones. After an event hosted by actress Kate Hudson and fashion designer Rachel Zoe, who are both investors, Massin’s became the first lab-grown diamond jewellery to be sold at Saks in New York and Los Angeles.

Rouvenat will offer pieces from €5,000 and its initial target will be the cosmopolitan residents of Paris, London, New York and Los Angeles.

The secondary market is another beneficiary of relaunched brands. Benoît Repellin, head of jewellery Europe at auctioneers Phillips, says: “[The revived names] attract collectors who are not familiar with the brands.”

Sarah Willersdorf, global head of luxury at Boston Consulting Group, believes the success of such ventures lies in “the strength of the brand — their original principles and stories” and how these can be revived to project “cultural relevance for today’s consumer”.

That is something LuxImpact’s team keeps front and centre of its raison d’être.