Downtown Chicago is busy, but office workers are missing 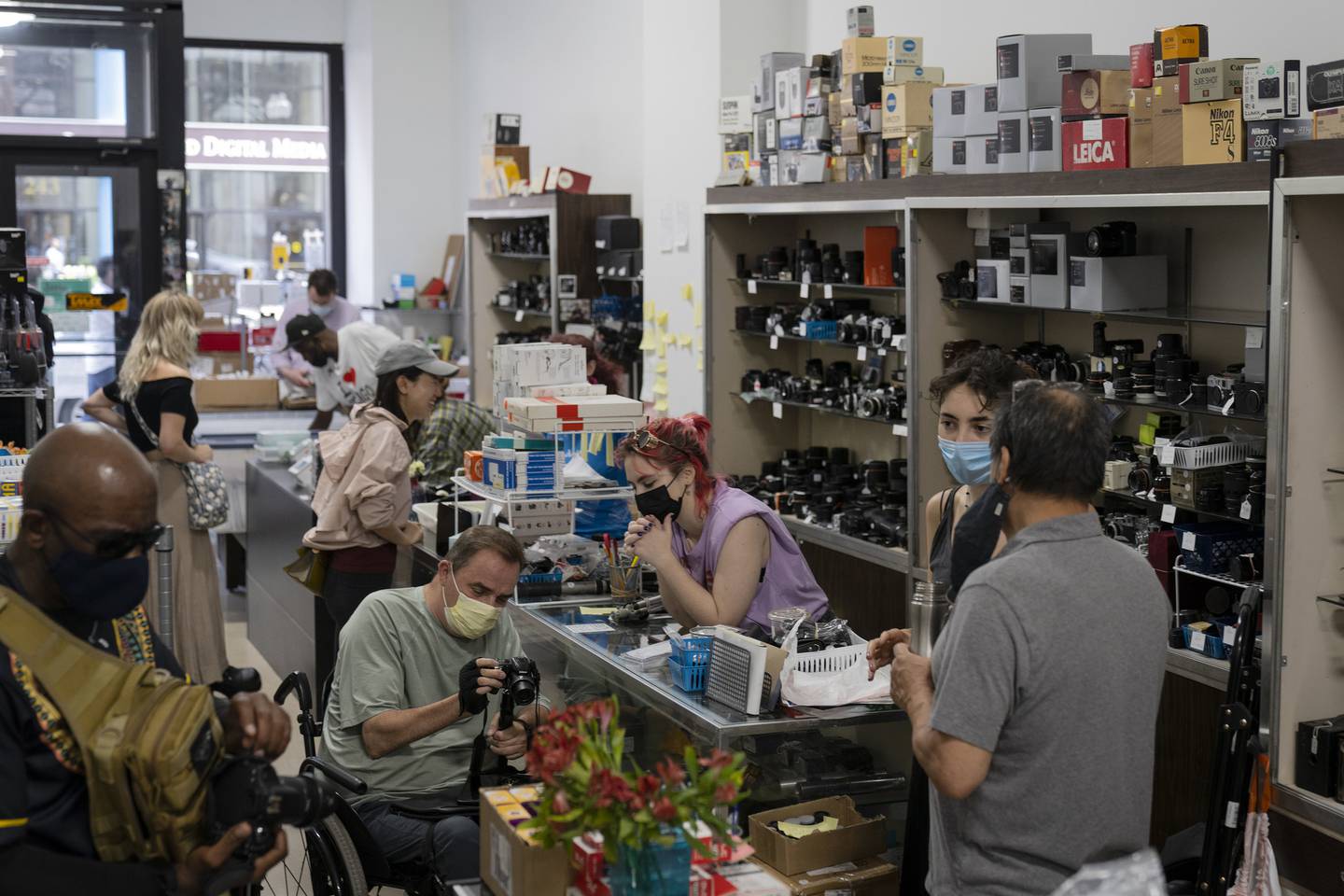 Tourists have returned to Chicago’s downtown this summer, and anyone looking at the crowds thronging Millennium Park, the Riverwalk and stores on Michigan Avenue might think the city’s pandemic crisis is past. But “For Rent” signs still cover many downtown storefronts, and office workers remain scarce, which means fewer customers for Loop retailers.

“Our customers are primarily people working for financial institutions and law firms, and you no longer see a lot of our customers, guys walking around with briefcases,” said Scott Shapiro, the owner of Syd Jerome, a luxury men’s clothing shop in the Central Loop. “It’s really a lot of young people in khaki pants.”

The advent of COVID-19 vaccines unleashed pent-up demand, helping store owners lease new spaces across the metro area. But downtown, the pandemic has made clear just how essential one constituent is: the office worker. While a spring and summer infusion of tourists has boosted foot traffic in many shopping districts, the Loop is a step behind, and street-level businesses may continue suffering until more companies call people back to the office.

But all its empty storefronts may also present the Loop with opportunities, according to retail experts. New shops could make the downtown livelier and help entice workers to leave their comfy home offices, especially if landlords reach out to independent, local and creative businesses instead of just national chain stores. That would also make downtown more appealing to others like the thousands of students and apartment dwellers who moved in over the past decade.

“You don’t have to be a corporate executive to enjoy the Loop,” said Michael Edwards, CEO of Chicago Loop Alliance, an advocacy group. “The downtown is not just a business district anymore.”

Don Flesch’s Central Camera has been a Loop mainstay for photography enthusiasts since the late 19th century. It got hit hard by the past two years of turmoil. The store was looted and set on fire in the aftermath of the May 2020 killing of George Floyd by a Minneapolis police officer, but reopened this year in its familiar location at 230 S. Wabash Ave. It’s a big change from 2019.

“Three years ago, you had flourishing activity outside of our door with traffic and honking horns,” he said.

The relatively quiet streets today mean the store must keep limited hours, four days a week, and business on some days is just 50% of the sales seen before the pandemic. But the 74-year-old, whose grandfather started Central Camera in 1899, said he’s not worried.

Office workers are starting to trickle back, bringing back some old customers, and Flesch decided to launch new services, such as providing one-hour photo developing, to help bring in new ones. Most importantly, he looks forward to fall, when photography students from local schools like Columbia College, DePaul University and others should stream in looking for new equipment and supplies.

“The office workers won’t come back 100%,” he said. “But we think we’re going to have a big month when the universities get back to full steam.”

John Vance, principal at Stone Real Estate Corp., said many downtown retailers are in a similar situation, seeing enough business from tourists and the few office workers who have returned to stay afloat, and looking ahead to fall. But few are willing to pull the trigger on new leases.

“There is very little leasing velocity occurring in the Loop,” Vance said. “You can feel the energy on Michigan Avenue and State Street, on both sides of the river, but unfortunately, even though many (retailers) do want to expand, the modest recovery that we’ve seen has not gone on long enough to help them make that decision.”

According to a 2022 report by Stone Real Estate, one-third of the downtown’s 1,369 storefronts are vacant and the overall vacancy rate nearly doubled from three years ago.

Foot traffic equals customers, and retail districts that don’t depend on office workers are doing better, according to Placer.ai, a data analytics firm that tracks mobile devices. Traffic in Old Town, Lincoln Park and Fulton Market was down less than 10% in June from the same month three years ago, while the Loop was down 27%.

And bad news has continued to hit downtown this summer.

Old Navy said this month it would leave its 32,000-square-foot store at 150 N. State St., formerly occupied by Borders Books, leaving another big hole in the retail market.

Still, the retail market is past the worst of the crisis, and some businesses seem willing to take a chance on State Street, according to Edwards. British sporting goods outlet JD Sports signed a lease earlier this year to take over a space once occupied by Forever 21 at 10 S. State St., several outlets agreed to occupy spaces at Block 37, and by late summer discount retailer Five Below will occupy the store at 36 S. State St., taking over from Blick Art Materials, which will move to 16 W. Randolph St.

“We don’t want to exaggerate the size of these leases, but people are shopping, and things are much better than they were before,” Edwards said.

Other spots with improving retail leasing activity are Willis Tower in the West Loop, according to Vance, where owner EQ Office just completed a $500 million makeover, adding a five-level retail hub called Catalog, and the stretch of Michigan Avenue near Millennium Park.

He attributes Willis’ solid performance to the 110-story building’s sheer size, which ensures a big customer base even with a small percentage of office employees coming to work daily. And Millennium Park attracts a critical mass of tourists, workers, residents and hotel guests that sustain surrounding retail.

More worrisome is the future of the LaSalle Street and Wacker Drive corridor between Clark Street and the Chicago River, which mostly depends on office workers, Vance added. The loss of so many customers brought pain to its local businesses, and the corridor’s vacancy rate increased to 35.6% this year, the highest ever recorded by Stone Real Estate for any retail district.

Many customers of Syd Jerome, now at 20 N. Clark St., still work from home, Shapiro said, especially lawyers who now handle routine court appearances and even trials via Zoom. That’s cut into sales, which declined 30% to 40% during several months this year, and up to 60% in the summer, usually a slow time for upscale men’s clothing.

“There’s nobody around to come in and buy something impulsively,” Shapiro said. “The good thing about our customers is they tend to have a lot of money, but now instead of buying new suits, they’re buying third homes in Palm Beach.”

Shapiro knows owners of similar shops in the suburbs or even on the other side of the Chicago River, which don’t depend as heavily on office workers, and their businesses seem revived.

But even though much of Loop retail still struggles, Shapiro said Syd Jerome will persevere. His father opened the shop in 1958, and since then it’s gotten through recessions, several robberies, a shattered window during the civil unrest of 2020 and the long climb back from the pandemic shutdown, even as several local competitors closed permanently. He now hopes office workers will return in big numbers after Labor Day, and the store will be ready.

“Being a retailer means being an optimist, so I’ve always made sure we have inventory, and we’ve kept our tailors employed,” he said. “There will be a return to the office, and people will start dressing better.”

Vance said new Loop retail could play a role in bringing workers back downtown, but landlords trying to fill the Loop’s empty storefronts may want to look west to Fulton Market for inspiration. Instead of a retail lineup of national retailers, the neighborhood just west of the Loop, now filling with new office and apartment developments, includes a mix of local and independent stores, especially on Madison Street between Halsted and Racine streets.

Outlets such as Tribeca Boutique, a women’s clothing store at 1035 W. Madison, The Fig Tree, a gift boutique located next door, and Blowout Junkie, a hair salon two blocks west, are all local retailers, Vance said, and provide the variety missing in much of the Loop.

West Loop resident and president of the West Loop Community Organization Damone Richardson said he agrees. He doesn’t find downtown districts like Michigan Avenue as appealing as he used to, and more often hits the shops along Madison.

“It’s an opportunity to connect with local proprietors, and also find unique products you can’t find at big-box or chain stores,” he said.

Edwards said there are already new retail concepts dotting downtown. Outlets such as The Color Factory, an interactive art museum in Willis Tower, the Medieval Torture Museum at 177 N. State St. next to the Chicago Theater, and the Museum of Illusions at 25 E. Washington St., offer experiences instead of just selling goods.

The University of Chicago’s Booth School of Business may have come up with the most unusual concept last summer when it opened Mindworks, a space dedicated to behavioral economics, in the Railway Exchange Building across from the Art Institute. Visitors can not only see exhibits on the discipline, which examines how people make decisions, they can also take part in research conducted on-site by university scientists and graduate students, sometimes as simple as predicting a series of coin flips.

Mindworks attracted more than 10,000 visitors in its first year, and nearly two-thirds agreed to participate in research sessions, according to Mark Temelko, a spokesman for the Booth School of Business.

“We want to take the behavioral sciences out of the ivory tower and into the everyday lived experience of people,” he said. “It’s a remarkably simple idea.”

Edwards said such ideas will help the downtown retail market eventually recover. But it’s going to take time, at least until 2024, as office workers return and property managers try to find the right mix of tenants.

“We’re going to need another year and a half,” he said.